This post is part of my Vegan in NYC series. Check out part one, Williamsburg, Brooklyn, to read what I thought about Champs, Dun-Well Doughnuts, Mast Brothers Chocolate, and Vaute Couture, and my second post, West Village, Gramercy and Chelsea, to read my thoughts on Jack’s Stir Brew Coffee, Beyond Sushi, One Lucky Duck, People’s Pops, and Pure Food and Wine. 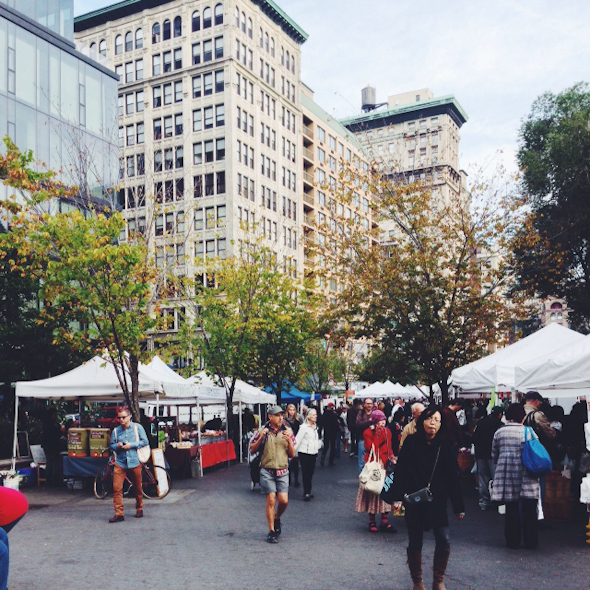 Day two began bright and early(ish) with a walk to check out the Union Square farmer’s market. The Greenmarket opens at 8am on Saturdays, and when Aaron and I arrived around 9am, it was already bustling. We took our time strolling through each stand, taking it all in before committing to something to tide us over until brunch. The Fall produce was gorgeous and we agreed that we would be very content to do our shopping here if we lived in the area. 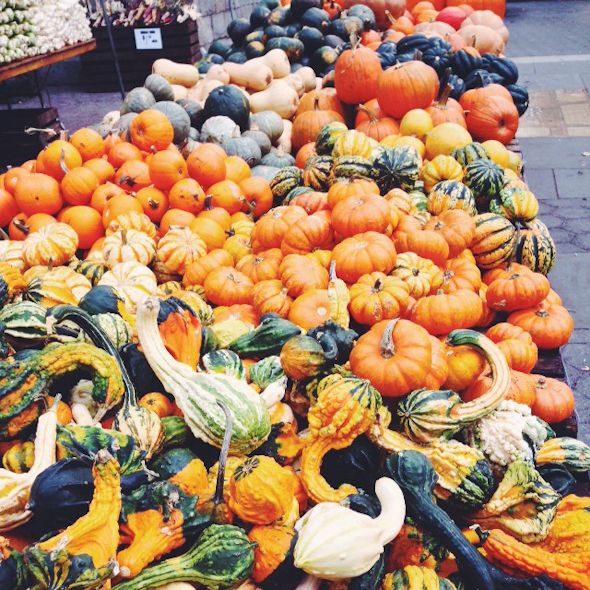 I spotted a vendor called Body and Soul Bakery selling all vegan baked goods and was even happier to see that they also had a handful of gluten-free options. The gluten-free chocolate pear muffin immediately caught my attention (most chocolate-anything does) and after purchasing a hot apple cider from another farm stand, I was ready to dig in. 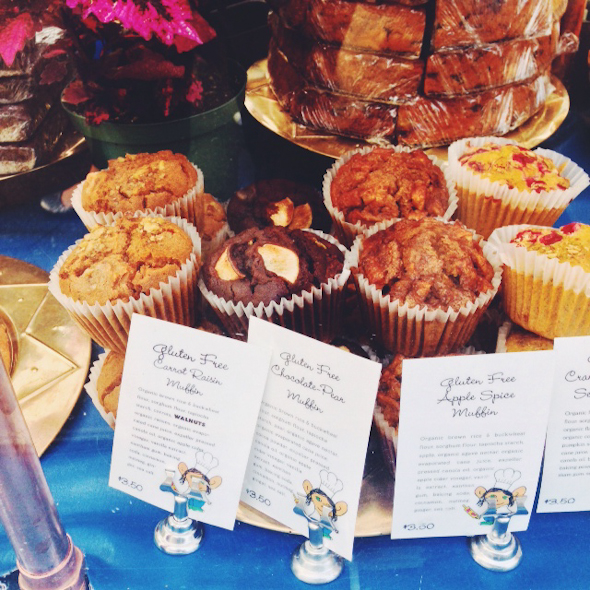 Aaron, on the other hand, was in desperate need of a cup of coffee, which we surprisingly could not find at the market. Luckily, Whole Foods was just across the street. Crisis averted. 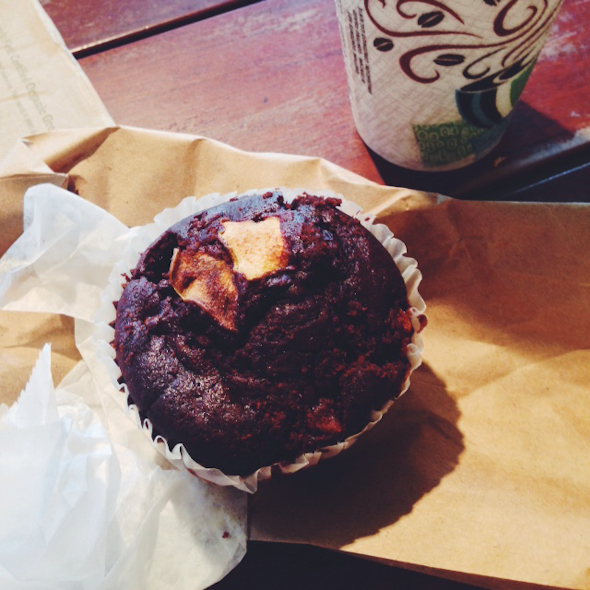 I’m always a little nervous to try gluten-free and vegan baked goods because I know from personal experience how difficult it can be to create a light, fluffy, non-sawdust-like texture. I so badly want these foods to be just as good, if not better, than their non-vegan, glutenous counterparts, almost as proof to the rest of the world that yes, it can be done! The muffin from Body and Soul Bakery was so good, maybe one of my favorite muffins ever. It was right in that sweet spot between muffin and cake, and the chocolate pear combo is one I’ll need to try at home. Body and Soul displays the ingredients below each of their labels and I noticed that they like to use a blend of brown rice, buckwheat, and sorghum flours with a little tapioca starch. This is one of my favorite gluten-free flour blends, and part of me felt pleasantly validated that I had picked up on it through months of trial and error in my own kitchen. 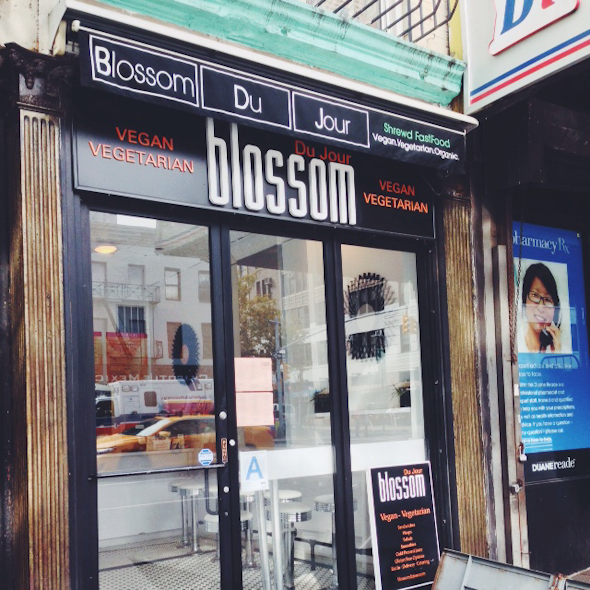 Sufficiently carb-loaded and caffeinated, Aaron and I walked through Times Square and lots of noisy construction to my least favorite part of the city: Midtown. In general, I like the energy of cities over suburbs, but this part of NYC is just way too much for me and I find it exhausting. However, I knew the temporary sensory overload would all be worth it once we had procured the famous Blossom Benedict Wrap from Blossom Du Jour. It’s not something I would normally gravitate towards and the description is simple: a vegan version of eggs benedict using tofu with hollandaise on a whole wheat or spinach tortilla.

The magic is in the hollandaise. 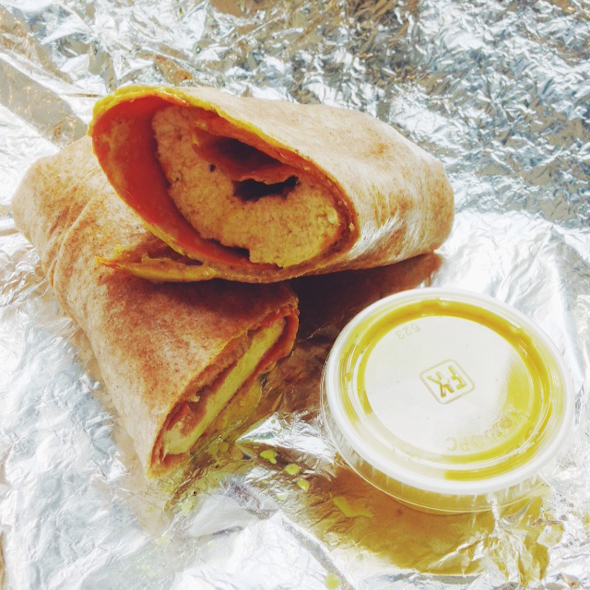 I don’t know what’s in that sauce, but it’s crazy addictive, very indulgent, and you’ll be very glad they give you extra on the side. 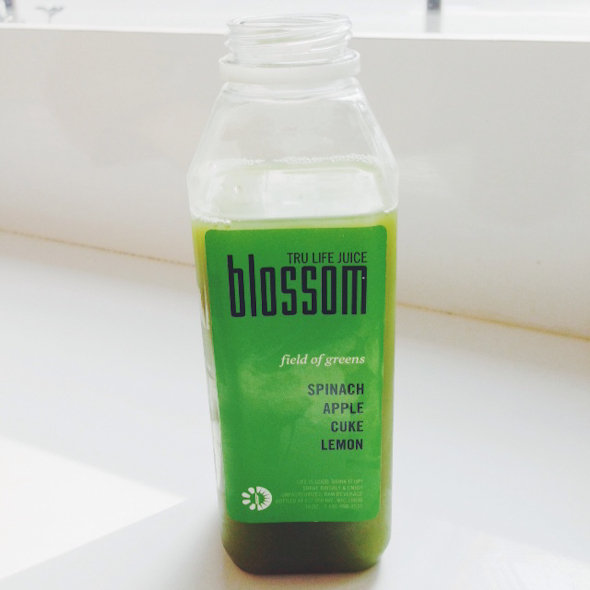 Along with our wraps, Aaron and I attempted to balance things out with one of Blossom’s juices, Field of Greens. I loved the spinach, apple, cucumber, and lemon together. 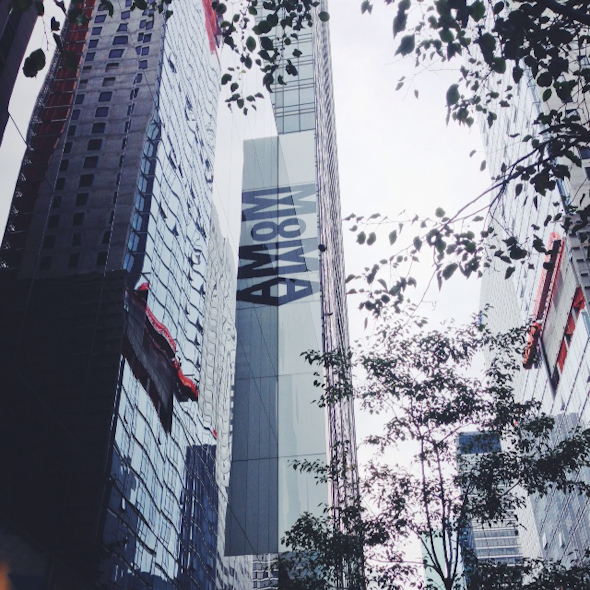 The benedict wrap, while delicious, left me feeling borderline-stuffed and sat in my stomach like a brick for the better part of the afternoon. I’d do it again, but it meant we needed to take a break from my jam-packed food itinerary. Instead of more eating, we stretched our legs in Central Park and took a detour over to MoMA so Aaron could be in awe of the art the way I’m in awe of really awesome vegan food. To each his own.

I did my best to keep up with Aaron who was like a kid in a candy store, but something about museums makes me really sleepy. I think it’s that same sensory overload / exhaustion thing that happens to me in Midtown, where I’m able to take things in up to a point, and then I hit a wall and I’m just done. My feet and lower back hurt, the crowds bother me, and I can’t appreciate the art. Anyone else? Maybe small galleries are more my thing.

A few hours (and sitting breaks) later, Aaron had happily seen everything on his mental list and we were ready for an afternoon snack in the East Village. 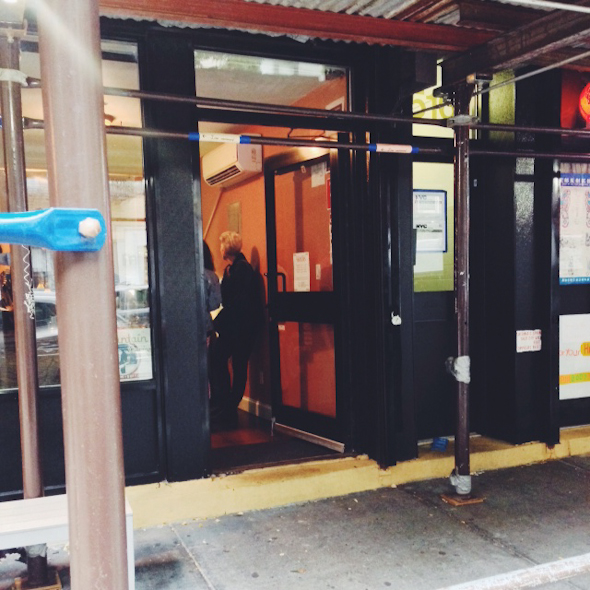 Oh, Lula’s. This place has such a crazy cult following, I was again worried it wouldn’t live up to the hype. I’m not sure if it’s because there’s still a legal battle over the name (something about the owners divorcing last January and losing the brand), but unless you are seeking this place out, you might just walk right past it, never knowing the vegan ice cream genius that’s inside due to the lack of signage. 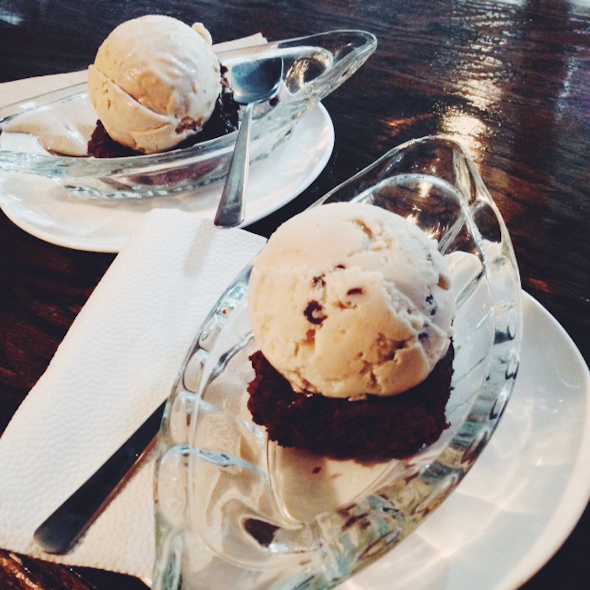 Aaron and I each ordered the brownie a la mode (they offer a gluten-free brownie, by the way!), with peanut butter and jelly cashew-based ice cream for him, and mint chocolate chip for me. Peanut butter isn’t usually my personal preference, but Aaron’s was so. good. I enjoyed mine as well, although I admit that I compared it to the Mint Sundae at Pure Food and Wine and well, that’s just not fair.

Had we not had dinner reservations within the next couple of hours, I may have even gone back to try Lula’s soft-serve, which I believe is soy-based. I saw another person order a flurry with chocolate and cake batter soft-serve twist and some sort of vegan caramel and walnuts. I had total dessert envy as we walked back to our West Village rental to get ready for dinner. 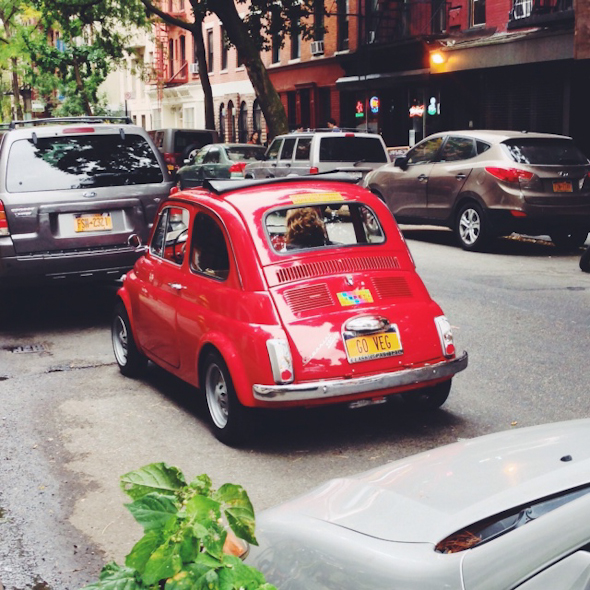 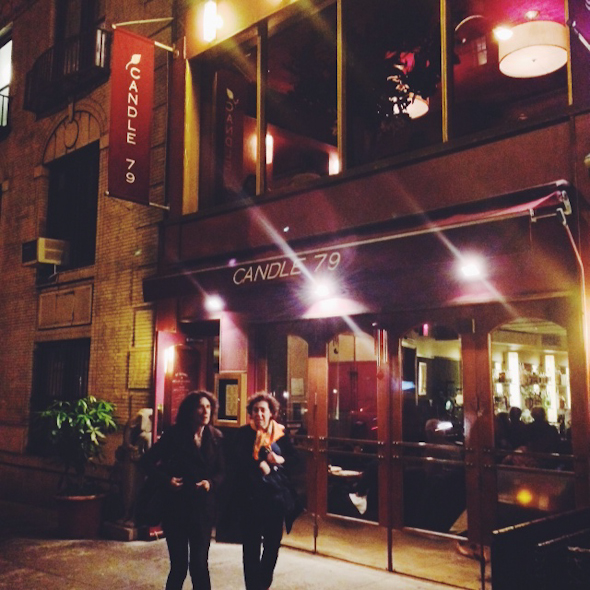 If someone had asked me to rank my must-visit vegan restaurants in order of non-negotiable-have-to-eat-there, Candle 79 would have been at the very top of the list. There are so few vegan fine-dining options (just one in Boston and it’s simply not on this level), and I don’t think I’ve ever heard a bad, or even mediocre, review of Candle 79. So yes, I had high expectations.

Similar to Pure Food and Wine, I immediately felt warm and cozy with the low music and dim lighting at Candle 79. Unfortunately, this ambiance was halted a bit when despite having made reservations well in advance, the host informed us that our table was unavailable. He offered another option, but asked if we thought we could be done in under an hour and a half because they were expecting a party of eight. In this instance, what we didn’t know wouldn’t have hurt us, and it wasn’t the best way to start the evening. Also, that party of eight wasn’t there when we left an hour and forty-five minutes later.

I wish I could say that our server made up for the snafu, but he seemed a little like he didn’t want to be there (we were given a new server around dessert time, so I gather he was finishing his shift and did in fact want to go home). It wasn’t bad service by any means, but in comparison to just about every other eatery we had visited where people seemed genuinely happy to work there, it stood out as meh.

Fortunately, the food held its own (despite what my shoddy iphone photos would lead you to believe).

Aaron started with the Manhattan Fig cocktail (Fig-infused Catoctin Creek Rye, Antica Formula Red Vermouth, Foro Dry Vermouth, maple bitters, and orange twist) and I ordered the Antioxidant Potion (huckleberries, grape, lemon, agave, elderberry, mint, and sparkling water). We really enjoyed our drinks, and I especially appreciated that I was able to order something that was unique and interesting sans alcohol. 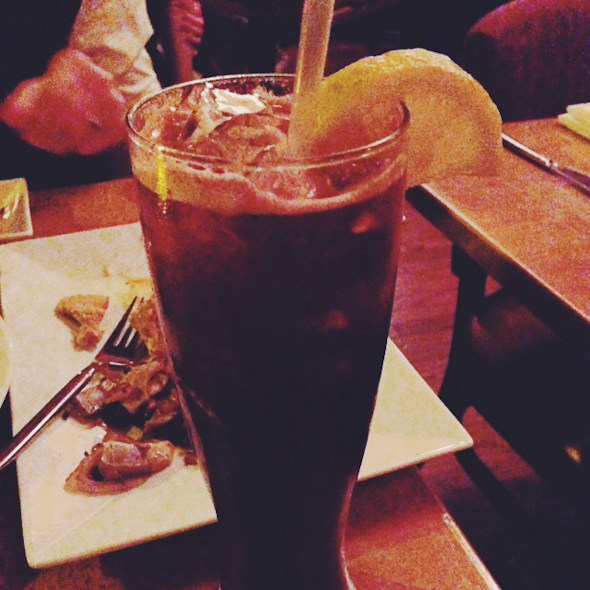 For our first course, Aaron chose the Stuffed Avocado Salad with baby greens, quinoa, squash, jicama, cucumber, cranberry beans, radishes, toasted pumpkin seeds, grape tomatoes, and chipotle-avocado dressing. I went with the appetizer special for the evening: various grilled, sautéed, and cornmeal-crusted mushrooms. The mushrooms were so flavorful and came with a delicious vegan tartar sauce for dipping, but Aaron was underwhelmed with the stuffed avocado. We both agreed that the ingredients were high quality and the presentation beautiful; however, the flavor of this salad was rather bland despite the enticing menu description. 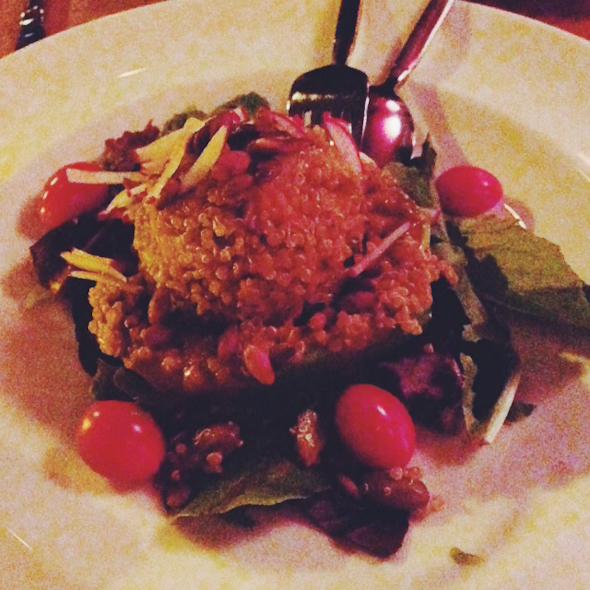 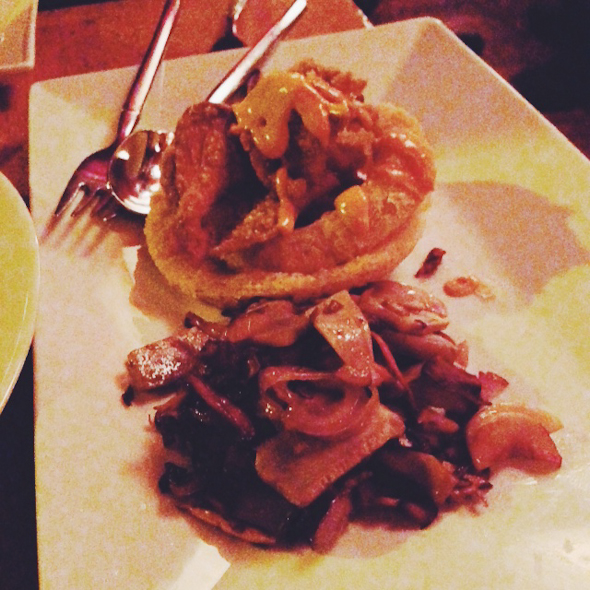 Things definitely started looking up with our main meals. I chose the Moroccan Spiced Chickpea Cake with sautéed kale, broccoli, onions & jalapeños, red pepper-coconut curry sauce, date-apricot-ginger chutney and toasted almonds, and Aaron went with the Pomegranate-Chipotle Grilled Tempeh with sweet potato purée, sautéed brussels sprouts & haricots verts, almonds, shallots, mole sauce, and fennel salad. Amazing. In particular, we loved the date-apricot-ginger chutney from my entree, and the briny fennel salad and pops of bright pomegranate from Aaron’s tempeh dish. His meal was like an elevated version of Thanksgiving dinner. 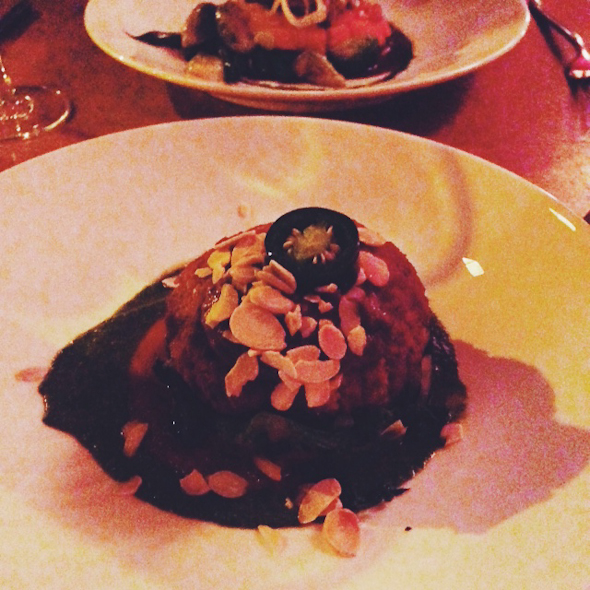 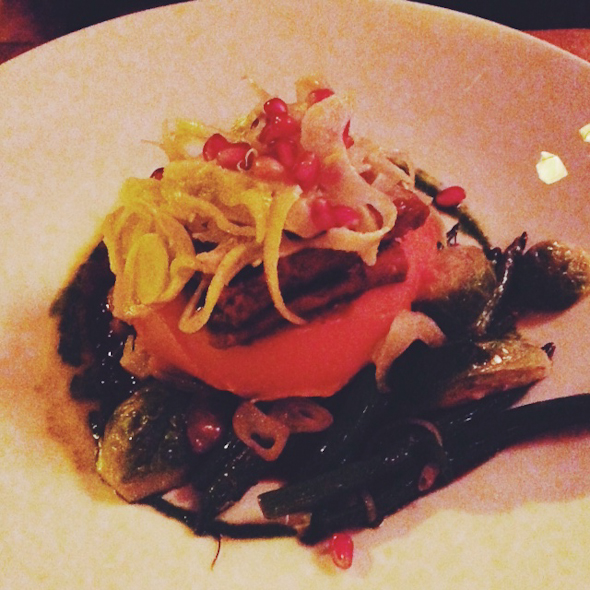 We made sure to save room for dessert, as hard as it was for me to not finish my chickpea cake. I am a dessert person at heart, and I was torn between the Live Pear Pie and the Chocolate Peanut Butter Bliss. Which do you think won out? 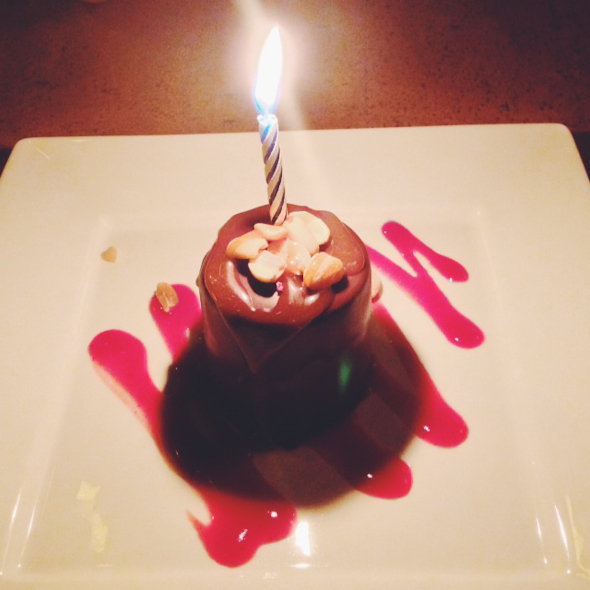 The kitchen thoughtfully brought it out to us with a candle and wished us a happy anniversary, and then I excitedly took the first bite of dreamy chocolate & peanut butter mousse, salted peanut-caramel crust, and berry coulis, while Aaron sipped his Casal Dos Jordoes Port. 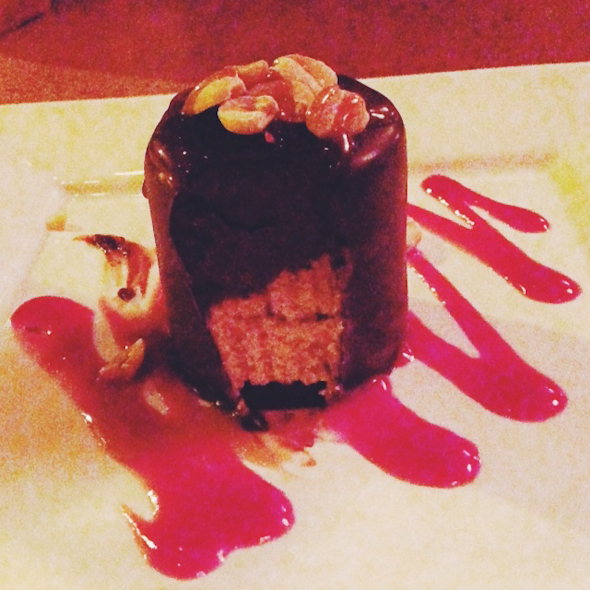 The texture of this dessert was so smooth and it was extremely rich, which made a few bites all that I needed to enter a blissed-out food coma. My only criticism was that the peanut butter was somewhat overpowered by the chocolate.

We opted for the subway over walking the three miles from the Upper East Side back to the West Village, although we did take a leisurely stroll to help our food settle before collapsing into deep sleep.

It was an incredible weekend, and not a bad meal the entire time. Yes, Pure Food and Wine stands out to us as our favorite food and dining experience, but really, each place did their “thing” exceptionally well. I had zero stomach aches (no small feat) and even with all of the indulgent eating, I ended up feeling pretty good after it all. I still think I’d be a few pounds heavier if I lived in New York, but there is something to be said for all of that walking. If you end up doing a similar vegan food tour, I recommend stretchy pants, flowy tops, flats, and bandaids for the inevitable blisters. Oh, and a green juice or smoothie once in a while.

Now the only question is…where should we eat next? So far, I have Cinnamon Snail, Babycakes, Blossom (the main restaurant), Peacefood Cafe, Angelica Kitchen, and Candle Cafe on my list.