This post is part of my “Vegan in NYC” series. Check out my first post, Williamsburg, Brooklyn, to read what I thought about Champs, Dun-Well Doughnuts, Mast Brothers Chocolate, and Vaute Couture. 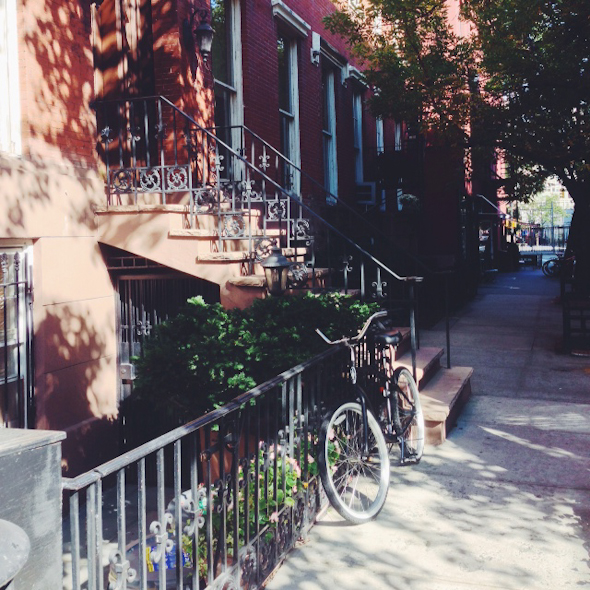 Let’s rewind to day one of my long weekend in NYC: Friday. Aaron and I chose to drive the four-ish hours from Boston to New York to save a little money on the train and avoid the hassle of the bus. We got really lucky in that the apartment we rented in the West Village actually had free street parking – such a rarity. The only problem we encountered was that the first day we parked too close to a fire hydrant and got a big ol’ parking ticket.

Lesson learned: do not park within fifteen feet of them. Fourteen feet and 11 inches will still get you a ticket.

Fortunately, my prayers to the parking gods were answered when another spot on the same block opened up (and yes, I sat on the stoop until someone left and then ran like a crazy person to stand there while Aaron moved our car). 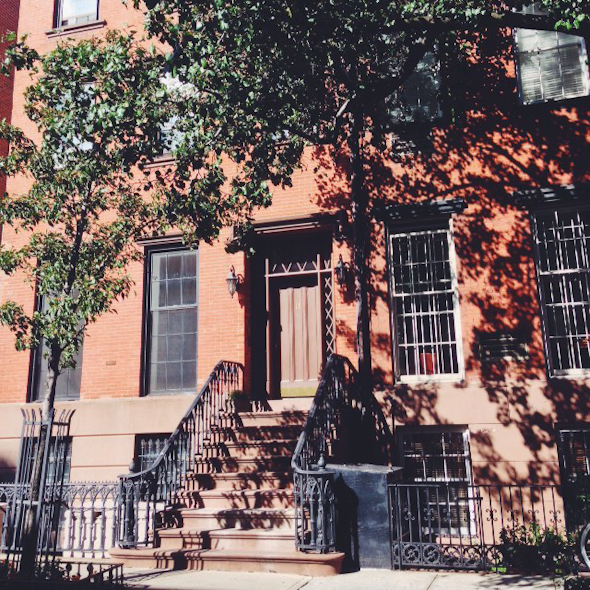 Parking glitch aside, we loved staying in the West Village. So much so, that we wondered why we had ever decided to move to San Francisco over New York (it was a debate between the two and had we chosen differently, our lives would likely be completely different). We found the studio through airbnb for a reasonable (well, by NYC standards) price and it was central to everything, giving us the luxury of walking to most places. This also allowed us to work up an appetite for all of the eating that ensued.

Our host very nicely provided us with a list of her favorite local eateries, and for coffee she said we had to try this cafe around the corner. 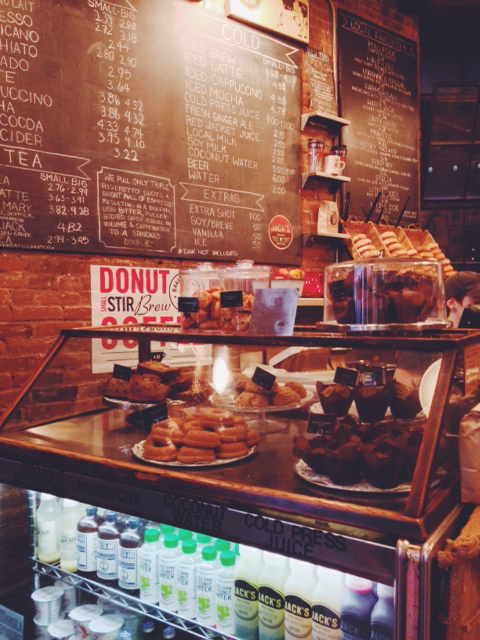 If we lived in the West Village, this would totally be our spot. It was so charming and cozy, and the drink options were fabulous. In addition to making their own fresh juices, Jack’s also carries bottled kombucha and sells some really interesting drinks. I initially ordered a simple hot apple cider to fully soak in Fall, but they were all out. Instead, the barista recommended another option with Fall-inspired flavors: a chamomile soy latte with cinnamon and honey (maple syrup if you’re vegan). I didn’t think I liked chamomile tea, but this was so good! I will definitely be recreating it at home.

Aaron really enjoyed his coffee and also ordered an apple cinnamon doughnut. I looked on longingly, only to realize later that it was vegan! All of the baked goods there are vegan, in addition to offering gluten-free and stevia-sweetened options as well. {Swoon}

That’s one of the things I love most about NYC – there are so many vegan options even at non-vegan places. I consider myself lucky to find soy milk at cafes in Boston, but New York frequently had multiple options (soy, almond, coconut). 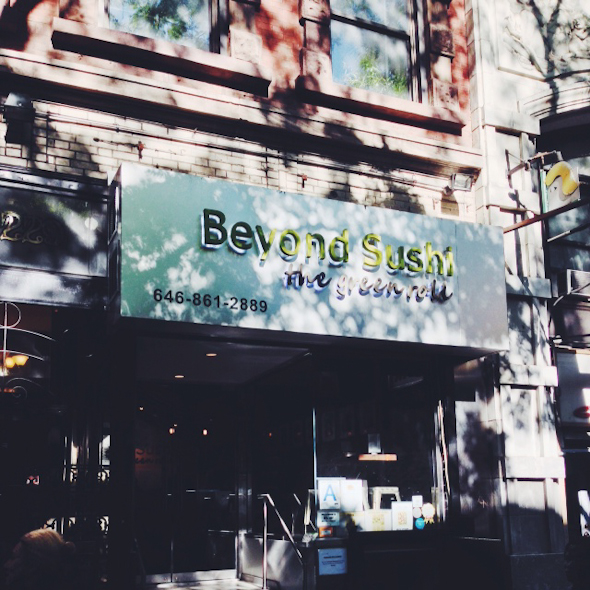 For lunch on Friday, I had my heart set on sushi, and I had heard amazing things about Beyond Sushi’s vegetable rolls. 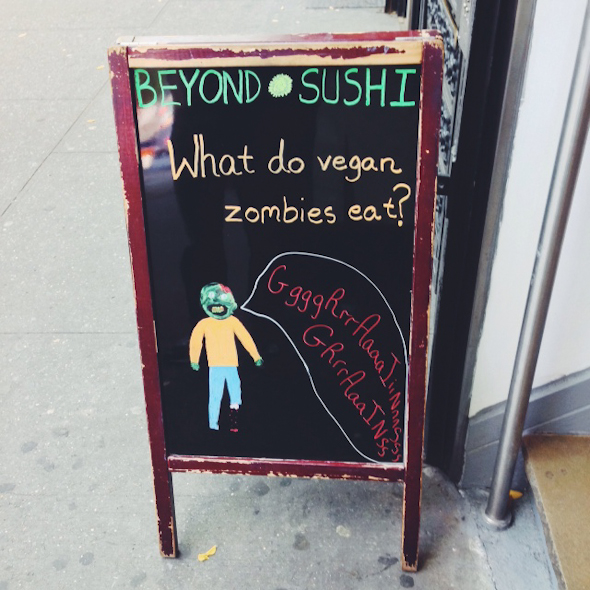 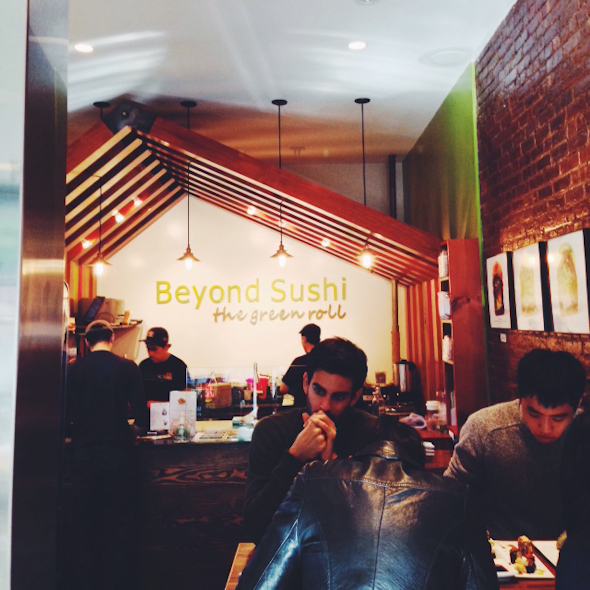 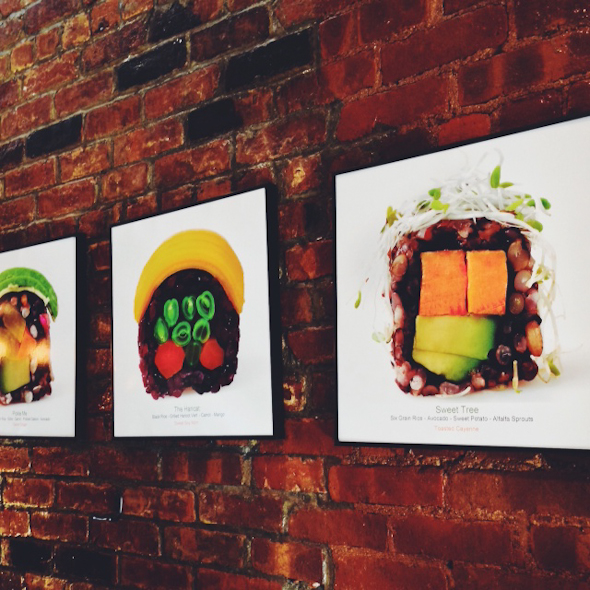 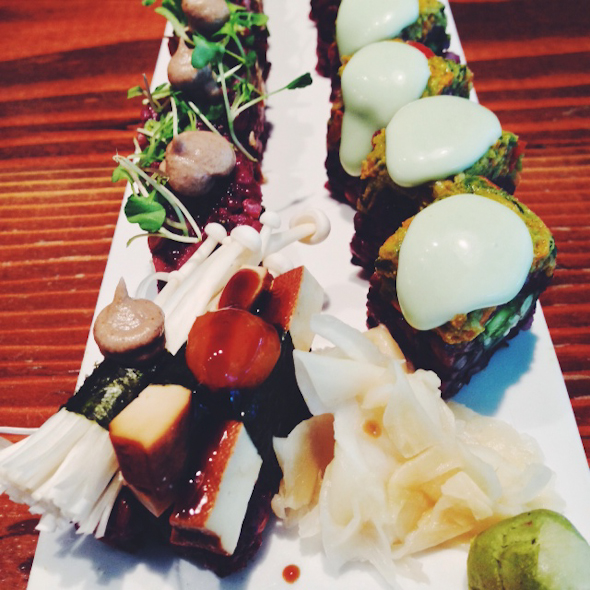 It took so much restraint not to order more. The mighty mushroom was definitely the stand-out for us, and had we not been headed out for more food so soon after, I may have said “Let’s do that again.” Best sushi of my life. 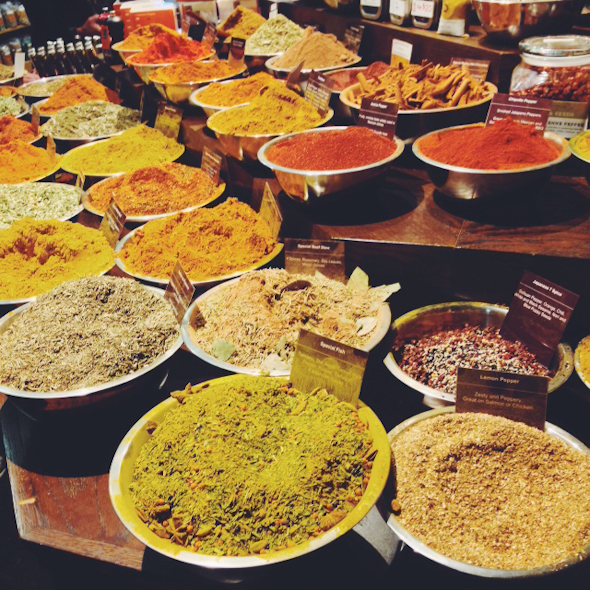 We made our way over towards Chelsea Market next, as it had a few things we wanted to check out. The market itself was what we expected – touristy and crowded – but I only had eyes for our next stop. 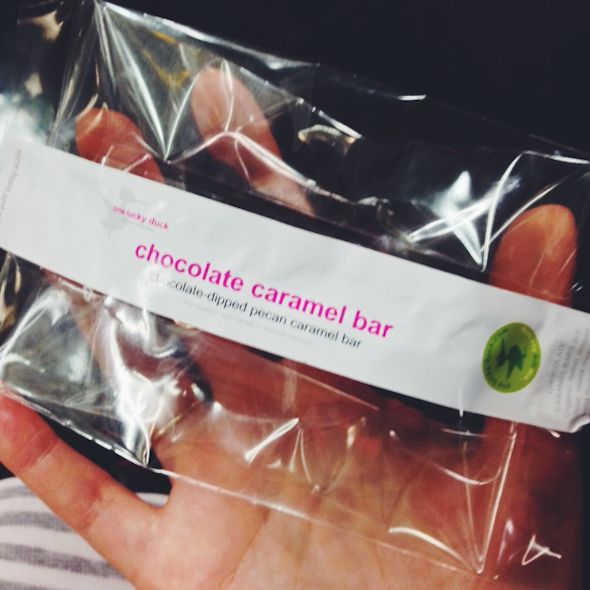 Okay, so the prices here are far from cheap. However, once we got over the sticker shock and I justified them by the high quality, organic ingredients and time it takes to make raw vegan food, we settled on a chocolate caramel bar. For $5 (one of the least expensive options), it was necessary to sit down and savor this one (note to self: do this more often). It was rich and decadent, but in that feel-good way of raw food that is so perfectly (naturally) sweet and satisfying. It was worth the hefty price tag, and I am still thinking about the smooth caramel filling. 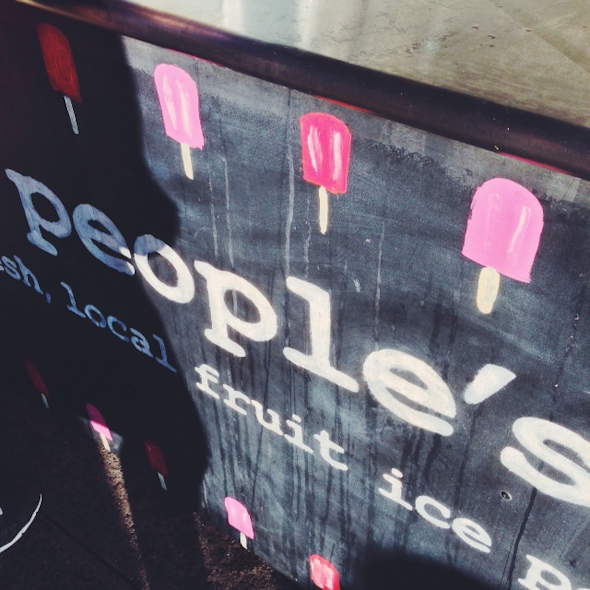 The weather was pleasantly mild and we decided to take a stroll along The High Line. But not without bringing along a couple of the famous People’s Pops, of course. 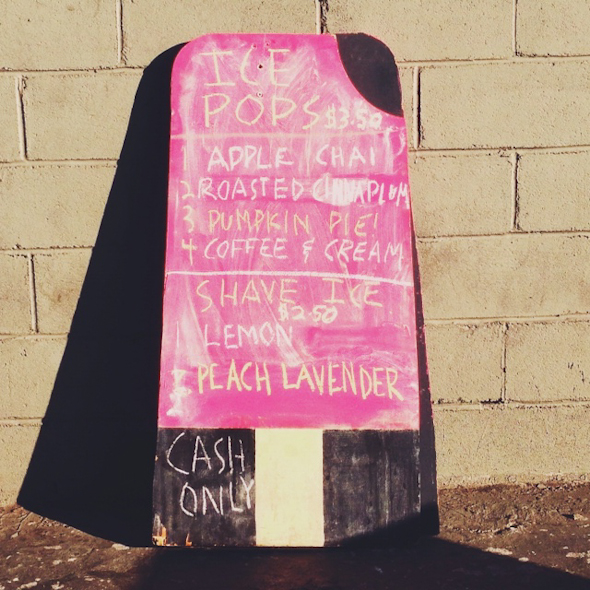 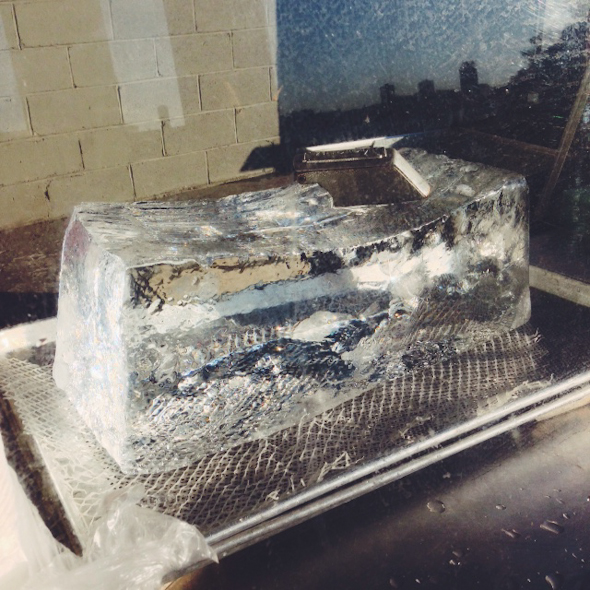 I debated between the shave ice and a popsicle, ultimately going with a popsicle because of this flavor: apple chai. In the Fall, anything apple and/or chai has my vote. Aaron chose the roasted cinnaplum. 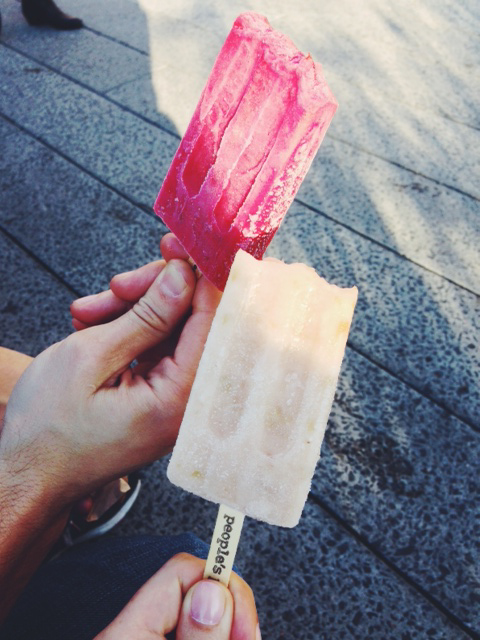 Both popsicles were so flavorful, and although mine was more icy and less creamy than the cinnaplum, we declared the apple chai to be our favorite. 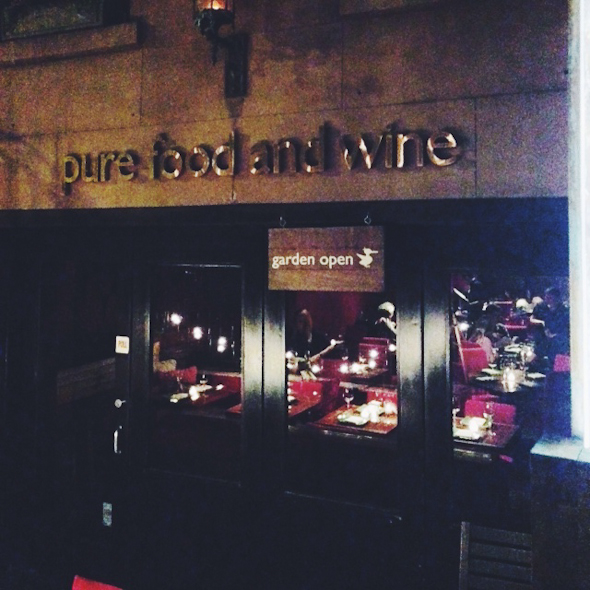 Fast forward a few hours and lots (and lots) of walking, and we arrived at one of two restaurants I was most excited about. Pure Food and Wine is mecca for raw, vegan fine dining. I made our reservation as soon as I knew Aaron and I would be taking a long weekend in the city, and mentioned to them that we would be there celebrating our anniversary. As soon as we entered the warm, dimly lit restaurant, the hostess wished us a happy anniversary and said she had a more intimate table for us in the garden. I immediately had a good feeling about what awaited. 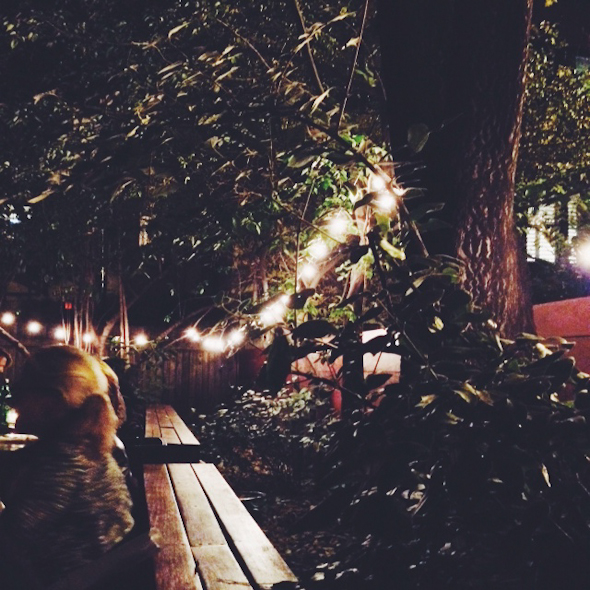 Now, before I gush about this meal, let me caveat the photos. The garden was gorgeous and beautifully lit with strings of small white light, which made for a very romantic vibe that was terrible for photos. The pictures do not do the food justice.

We started with drinks, after carefully studying the very extensive wine list and cocktails. I ordered a draft blueberry kombucha, and Aaron had a Stargazer, made with star fruit, passion fruit, yuzu, lemon, lime, sake and himalayan pink salt. The Stargazer was refreshing and delicious. The blueberry kombucha was a little bland, unfortunately, but I also brew my own and think my homemade kombucha is awesome. So, perhaps I should have ordered something else.

For my first course, I went with the Philly Roll of avocado, kim chee and creamy cashew cheese with tatsoi, hijiki, scallion and sweet chili sauce. It was out. of. this. world. Remember when I said Beyond Sushi was the best sushi of my life? This takes the cake. 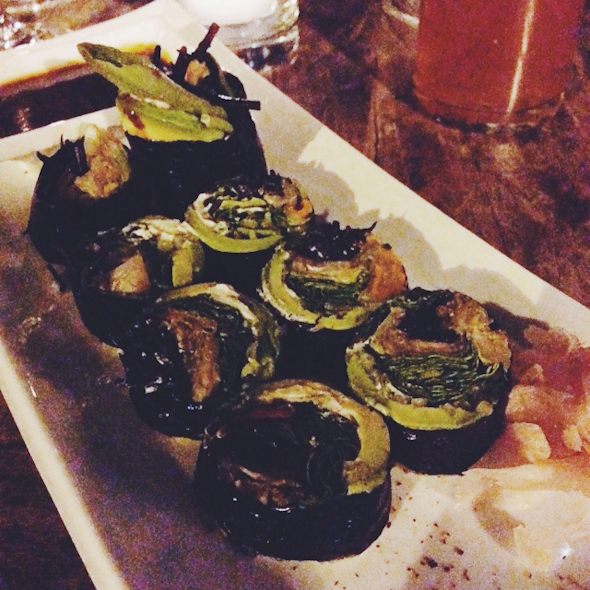 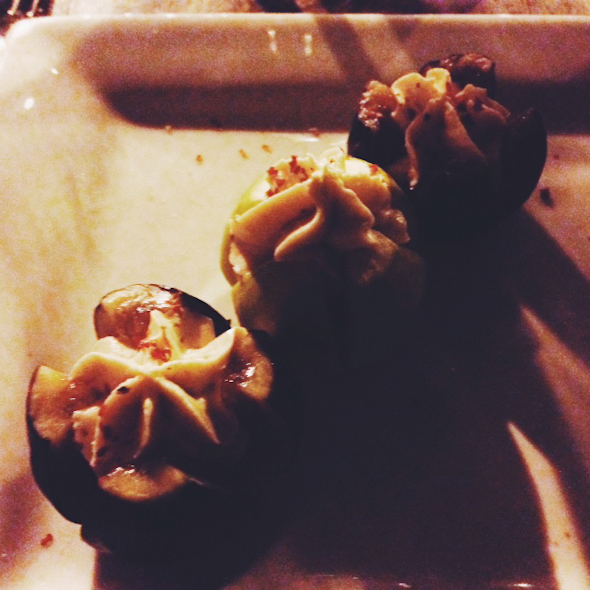 For our second courses, I decided on the Portabella Mushroom with Cauliflower and Horseradish Aioli (nut-free, by the way) with kale chimichurri, peach salsa, barbecue sauce and haricots verts, and Aaron chose the Cauliflower and Sweet Corn Polenta with Bourbon Maple Peaches and Radicchio with cherry tomatoes, purslane, candied pistachios, cashew cheese and avocado pistachio vinaigrette. Do you even need me to tell you how awesome these were? 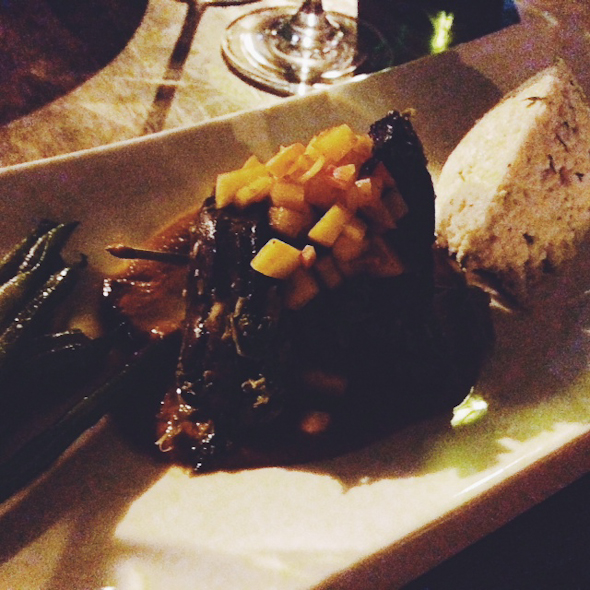 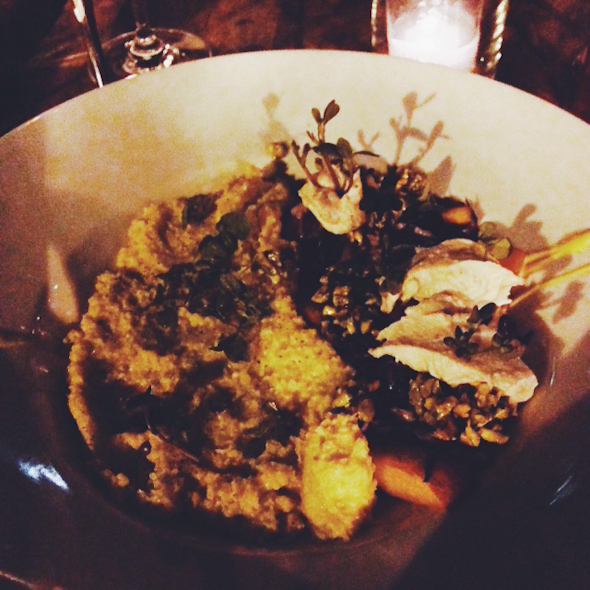 I loved my portabella mushroom dish, but the polenta with candied pistachios stole my heart. The combination of savory with sweet was to die for. It was the best thing I ate the entire weekend, possibly ever.

And then there was dessert.

Everything on Pure Food and Wine’s dessert menu is so interesting, which makes it hard to choose if you’re like me and seek out flavor combinations that you’ve never tried before. However, I knew we needed to try their famous, albeit ordinary-sounding, Mint Sundae. I gathered we chose well when our server told us this was her favorite thing on the menu. She brought it out to us with a candle and wished us a happy anniversary, and then we excitedly dug in. 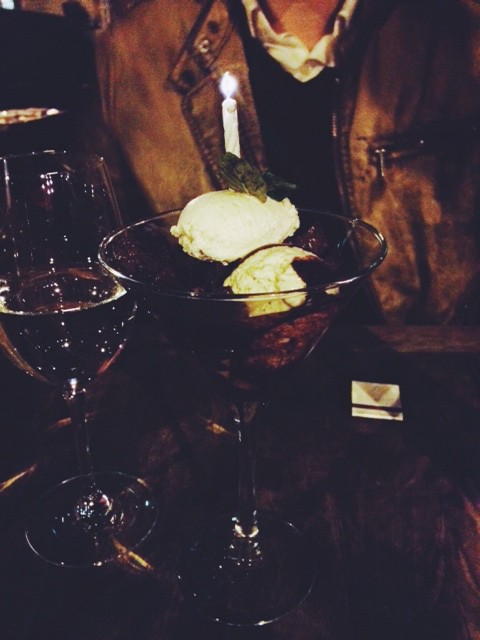 I mean, come. on. This had rich chocolate sauce, fresh mint, mint chip and chocolate ice creams, fudgy and crispy mint chocolate cookies, all topped with the smoothest vanilla cream. This sundae is heaven, and tied with that ridiculous polenta for the best thing I ever ate.

Before dining at Pure Food and Wine, I could never choose a favorite meal or a favorite restaurant experience. This changed everything. The fact that it’s vegan and raw and this good is mind-blowing. They are setting the bar so high and totally inspiring me to play around more with raw food. I can’t wait to go back.

Do you have a best thing you ever ate?