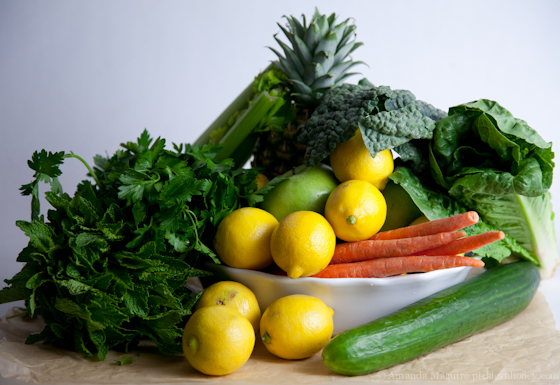 Juice cleanses seem to be really trendy right now. I’m seeing them all over blogs and instagram, and I keep getting Groupon types of emails for one, three, and seven-day programs. I’m not sure I buy into the need for a “cleanse”, to be honest, but I also know that I feel pretty damn good when I juice regularly. However, some of the cleanse programs seem to be kind of high in sugar, and all are pricey at about $70 per day. That said, the amount of organic produce it takes to make five juices plus one nut milk (which seems to be the standard) isn’t cheap either, so I understand why they’re priced that way, especially when you factor in shipping. Plus, who wants to clean their juicer five times a day?

I’m very much not looking forward to the prepping and cleaning part of the process, but I also have a perfectly good juicer sitting on my counter and I work from home, so…I don’t have a good excuse as to why I can’t attempt a homemade juice cleanse. Fortunately, a quick Google search led me to Susan’s blog, Travel Junkette, and she’s already done all of the research and put together recipes. I’m sure there isn’t any one correct way to do a cleanse, but I like that her juice recipes are veggie-heavy and low glycemic. I also like the idea of following somewhat of a program rather than throwing a bunch of random ingredients in my juicer and hoping for the best (which is what I do most days).

To summarize, I’ll be drinking one juice every couple of hours, starting around 8:30am and ending around 7 or 8pm. The juices will include a green juice, followed by a pineapple/apple/mint juice, then another green, then a spicy lemonade (this one could be rough), a more earthy beet/carrot/ginger combo, and then a homemade almond milk. I’ll also be drinking water and green tea throughout the day if the craving strikes. And yes, I expect I will have to pee about a million times.

Here are my supplies, with most coming from Trader Joe’s to keep costs down, and the rest purchased from Whole Foods:

Aaron did the grocery shopping and got some weird looks in the checkout line, but he told me he announced to the cashier and the people in line behind him that his wife is “attempting a juice cleanse and she’s a little nuts”, and then they all collectively said “ooooooh” and went on with their days. Because vegetables are so weird! 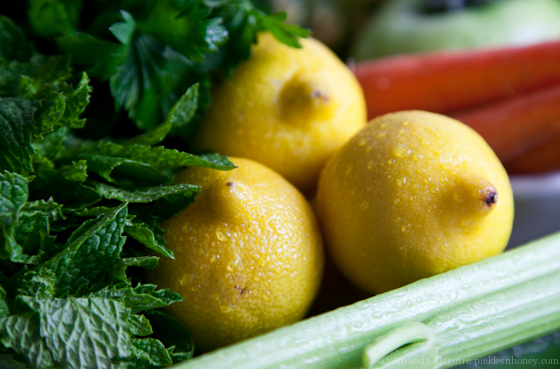 What am I hoping to gain from all of this? I’m not completely sure. I think I’m more curious than anything else, and I’m also hoping that the awesomeness I feel after juicing once a day gets magnified. My goal isn’t to lose weight (which would be very temporary anyway), but if it helps with bloating, that would be a nice perk. I’m opting for three days of juicing because I do like the challenge of seeing if I can stick it out for that long, but it’s also long enough that I feel like I’ll be able to get a good sense of whether it works for me. And if it doesn’t? Well, it’s only three days. Less if I call uncle and find my spoon in the almond butter jar later today.

Wish me luck and I’ll report back with an update soon! In the meantime, have you ever tried a juice cleanse or been interested in trying one? Any words of wisdom?