I think last week’s raw Thanksgiving temporarily depleted my kitchen creativity. This week, I’ve been burnt out! I’ve had savory oats for either lunch or dinner most days, and pasta and veggies the others. Oh, and avocado toast. It never gets old.

I’ve also been hitting the egg nog hard. Sans alcohol, but still. It’s gotten slightly out of hand. And I’m not sure I’ve ever even tried real egg nog – it sounds gross to be honest – however, somewhere in the last couple of years, I discovered the vegan versions and now I appear to be seasonally-obsessed. 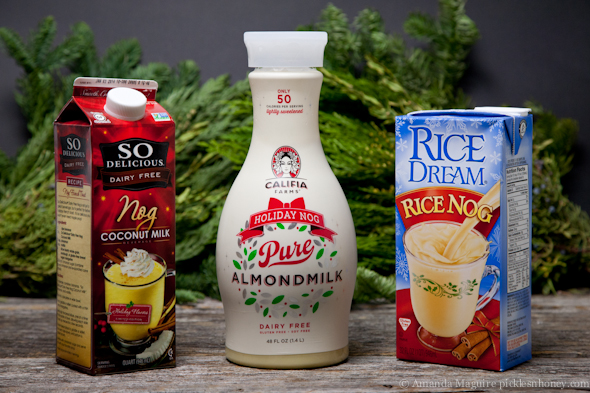 It all started out so innocently when I was at Whole Foods the other day shopping for food photography props (not groceries, that was the day before). I spotted the new Califia Farms Holiday Nog, and then the So Delicious coconut milk version. I’ve tried the latter and remembered liking it, but then I recalled a conversation I had with my brother where he said Califia Farms Nog tasted off and weirdly alcoholic in a bad way. Torn between trying something new and going with what I know I like (story of my life), I decided my best bet was to buy both. And then I passed the Rice Dream Nog and got that too. Taste test time!

I’m not going to lie, I was very excited for this taste test, and asked Aaron to take part too. He was, admittedly, less excited, but knew there would be cookies after (that post is coming soon!). We tried the Califia Farms Holiday Nog first because we’re both suckers for pretty packaging and almond milk. The verdict? A nice, creamy texture followed by a very bizarre quasi-alcoholic flavor and overpowering smell. Aaron didn’t get alcohol at all and instead proclaimed that it tasted like bubble gum. From there on out, that was all I could taste. Nutmeg-y bubblegum. Not good. 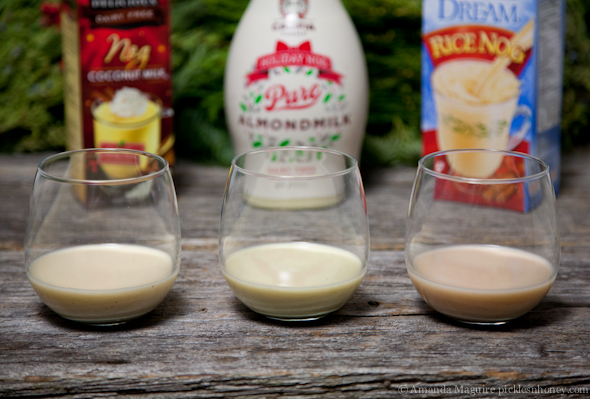 The Rice Dream Nog was up next, and the consistency was much more watery. Thankfully, the flavor did not include bubble gum, but instead was heavy on the cinnamon. Aaron enjoyed this brand the most, but I found it tasted like cinnamon rice milk, which I suppose it is.

And lastly, the So Delicious Nog, which I found to be thick and almost custard-like, with the most traditional egg nog flavor of the bunch. This was my favorite, and I also found the color to be the most appetizing and golden with flecks of what I hope were nutmeg and not “natural” something or other…which brings me to my final point. All three include carrageenan and those lovely “natural” flavors. So while it’s awesome that there are multiple options for dairy and egg-free nogs, the ingredients could be better.

Final verdict: So Delicious Coconut Milk Nog in a pinch, but homemade is probably best. I think I feel my kitchen creativity returning…

P.S. Barley was really into this photo shoot for some reason. Perhaps it was the delicious nutmeg bubble gum smell, or maybe he just wanted to get back in front of the camera. Either way, this is why we don’t photograph food on the floor. 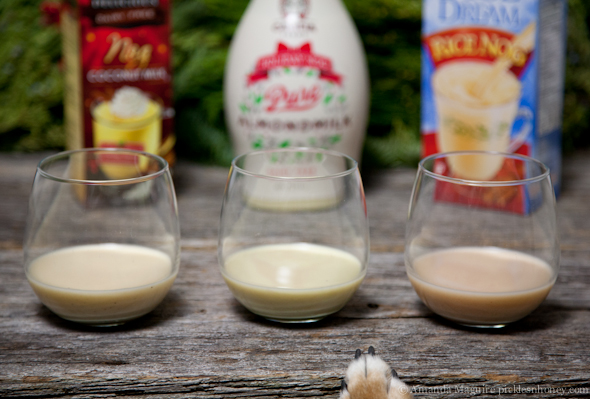 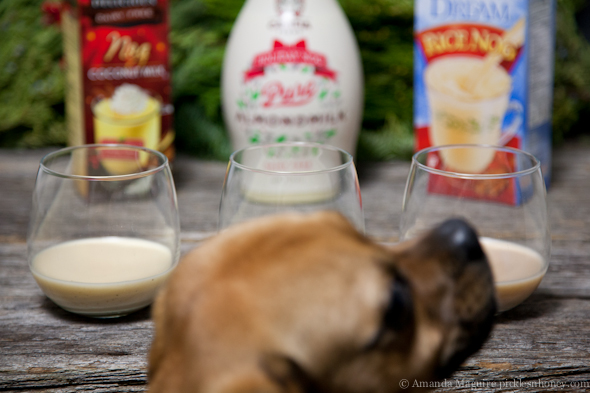